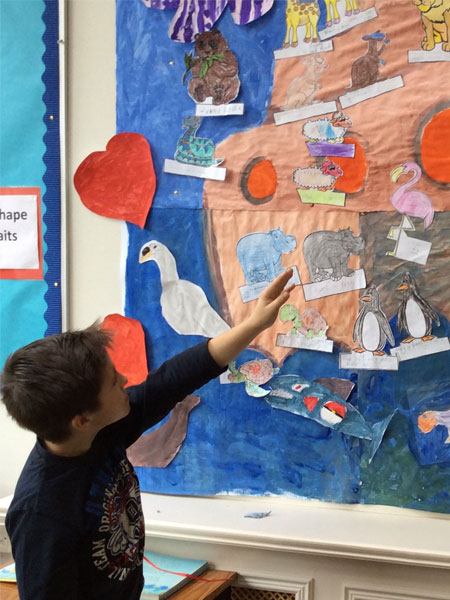 Friendship Week 2015 – All Aboard The Friend Ship

This year the whole school worked together to create a Friend Ship based on Noah’s Ark.  Thanks to our new art teacher Clodagh for helping us to paint the Friendship and thanks to Jackie for the design.

On Friday we had a Friendship Week assembly and sang songs, told kind stories and read some poems. Shane told us about some of the kind things we said about each other:

“We all coloured an animal and then added a friendly comment underneath – Oscar is extremely polite; Jack is creative and makes up magical creatures; Cameron is good at focusing; Sophie is a kind girl and is interesting to listen to.”

We chose James Taylor’s song You’ve got a Friend to sing at our Friendship Week Assembly this year.  The chorus goes like this:

You just call out my name, and you know where ever I am

All you’ve got to do is call,

And I’ll be there, yeah, yeah, you’ve got a friend

Then the teachers told us how we had been kind to each other this week.  In one class they told each other why they were a star.  They said things like “You’re good at computer games” or ” You’re a fast runner” or ” You’re kind and handsome”. It was remarked how kind and friendly the senior class was to the juniour class.  Another teacher told us how we were making an effort to get to know the new children.  Luke very kindly said that we should give them to the teachers too and then he read this poem.

And another Summer too

But there can never be

Or special Friendship Week activity was giving each other Declan’s Dollars in the yard for special acts of kindness. Oscar gave Suleiman a dollar because he was talking nicely to Fionn and Jake; Aaron gave Shane a dollar for great team-work; Henry gave David a dollar because he wanted to welcome him to the school.  And here’s another the poem that Ms. Devine’s said at assembly:

A cupful of kindness,

And plenty of care

Some hugs and some kisses,

And just while we’re at it,

Let’s throw in some fun!

Now mix it and  stir it,

It tastes good to me!

We just need to try.

Just take it, and give it,

We use cookies on our website to give you the most relevant experience by remembering your preferences and repeat visits. By clicking “Accept”, you consent to the use of ALL the cookies.
Cookie settingsACCEPT
Manage consent

This website uses cookies to improve your experience while you navigate through the website. Out of these, the cookies that are categorized as necessary are stored on your browser as they are essential for the working of basic functionalities of the website. We also use third-party cookies that help us analyze and understand how you use this website. These cookies will be stored in your browser only with your consent. You also have the option to opt-out of these cookies. But opting out of some of these cookies may affect your browsing experience.
Necessary Always Enabled
Necessary cookies are absolutely essential for the website to function properly. This category only includes cookies that ensures basic functionalities and security features of the website. These cookies do not store any personal information.
Non-necessary
Any cookies that may not be particularly necessary for the website to function and is used specifically to collect user personal data via analytics, ads, other embedded contents are termed as non-necessary cookies. It is mandatory to procure user consent prior to running these cookies on your website.
SAVE & ACCEPT