The Legend of St. Declan 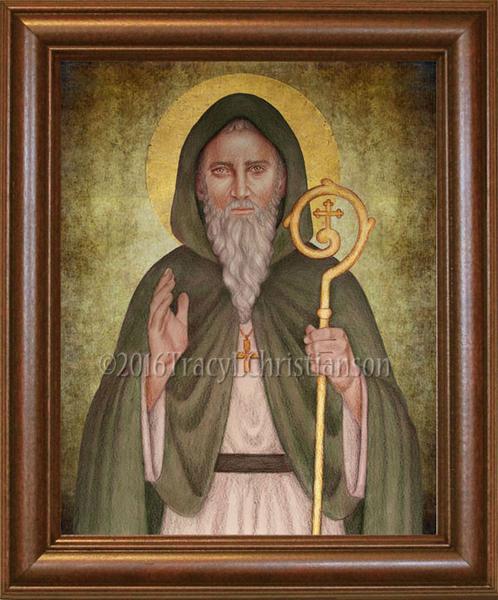 We’ve all heard the legend of St. Patrick banishing the snakes from Ireland.

Remember how St. Brigid spread her cloak on the ground and it grew and grew until she had enough land to build her monastery.

Story-tellers love to exaggerate.  Well, that’s what the writers of the legends did.  And they also got a bit of fun out of taking things literally.  Take St. Brendan, for instance (he’s the chap who sailed all the way to America in a little leather boat).  He might have come home and said he had a whale of a time.  Now the writer of the legend ended up telling us that St. Brendan lit a fire on the back of a whale because he thought it was an island.  Roast whale anyone?

The lives of the early saints are full of strange and wonderful happenings, and the life of St. Declan is no exception.  There really was a Declan who live in Ardmore, Waterford probably between 350 AD and 450AD.  He is a fairly important man and he is said to have converted his people to Christianity around the same time that St. Patrick got rid of those snakes.

Legend has it that a golden bell miraculously appeared when St. Declan was celebrating mass after being made a bishop.  Unfortunately, one of Declan’s companions forgot the precious bell when they were off in Wales (it’s a bit more serious than forgetting your swimming gear on Friday).  You’ll never guess how he got the bell back…

The bell was ferried back, on a huge stone, that floated across the sea all the way to Ardmore!  (See if you can find the bell on our Ceramic Wall Mural).

Now, I don’t know if it’s the same stone, but there’s a huge rock on the beach in Ardmore called St. Declan’s Stone.  It is said that if you crawl under it on St. Declan’s feast day (24th July) you will be cured of arthritis.  Well this local lady, who had a heart of stone and was as hard as rock herself, thought she would give it a try.  The stone dropped down a bit stopping this hard-hearted lady getting her miraculous cure.  It took two hardy local lads to pull her out!

There’s another legend of St. Declan and a special picture of it was painted by the artist Patrick Pye.  It’s hanging in the secretary’s office. Take a good look at it and see if you can make out the story…  Now read Cian and Ryan’s versions below.

Now then thing about a legend is that it is a story passed down from one generation to the next.  If you scratch the surface of the story you might find a gem of wisdom tucked away among the fantastical bits.  There might just be some deeper truth in among those mysterious happenings.  Its a bit like the ‘deeper magic’ we read about in The Lion the Witch and the Wardrobe.

So around the time of St. Declan’s School’s 50th anniversary in 2008 we learned a lot about The Legend of St. Declan.  (Take a look at Ryan’s and Cian’s and Shauna’s pages from the book they wrote).  Three things stood out for us in the story:

Most of the children were a bit horrified by Manachin getting whacked with St. Declan’s crozier.  But we can’t ignore that we hurt each other sometimes and we feel a bit broken and mixed up.
The next thing was the crozier. The children wondered what it was for.  A crozier is a long staff shaped like a shepherd’s crook.  The shepherd uses it to save little lambs that may have wandered off and fallen onto a ledge that is difficult to reach.  A bishop is often shown with a crozier because he is meant to be ‘the shepherd to his flock’.  So it is a good symbol for looking after each other (if used correctly!)
And the last mysterious element is the holy well in Ardmore, near where St. Declan had his monastery.  Water is always connected to new life and is often used in religious ceremonies like baptism.  Remember in St. Declan’s time people were only learning about christianity for the first time.  St. Declan would have baptised many of the people from his clan.  http://irelandsholywells.blogspot.ie/2011/08/saint-declans-well-ardmore.html

So now translate those three elements into the school logo.

It has a broken purple ring.  This stands for each individual; all of us.  We are a all little bit broken in one way or another.  Sometimes we need to be rescued from the hurt that builds up inside.  But most of the time we need to be supported.  The green shoots are supporting the purple ring.  The ring is purple because purple is often used as the colour of mourning (when someone dies) and penitence (when we are sorry for the things we do wrong).

The purple ring is supported by green shoots based on the crozier.  The idea is that the strong green shoots support the sufferings – they bend but don’t break.  This stands for the community of St. Declan’s where we hope to support each other on our road to learning to deal with our brokenness.  The shoots also grow.  We help each other grow and that’s why our motto is OPENNESS TO GROWTH.

And finally we have the water.  No prizes for guessing that it is the symbol for the well.  But can you guess what the meaning of this element is.  Here’s a clue…go to the page about the St. Declan’s Code

2022 Term Dates For Your Diary

We use cookies on our website to give you the most relevant experience by remembering your preferences and repeat visits. By clicking “Accept”, you consent to the use of ALL the cookies.
Cookie settingsACCEPT
Manage consent

This website uses cookies to improve your experience while you navigate through the website. Out of these, the cookies that are categorized as necessary are stored on your browser as they are essential for the working of basic functionalities of the website. We also use third-party cookies that help us analyze and understand how you use this website. These cookies will be stored in your browser only with your consent. You also have the option to opt-out of these cookies. But opting out of some of these cookies may affect your browsing experience.
Necessary Always Enabled
Necessary cookies are absolutely essential for the website to function properly. This category only includes cookies that ensures basic functionalities and security features of the website. These cookies do not store any personal information.
Non-necessary
Any cookies that may not be particularly necessary for the website to function and is used specifically to collect user personal data via analytics, ads, other embedded contents are termed as non-necessary cookies. It is mandatory to procure user consent prior to running these cookies on your website.
SAVE & ACCEPT